Where Are all the 179-Centimeter Tall Soccer Players?

How much does height matter in soccer?

In Wednesday’s semifinal, Spain was considerably smaller than the German team (average height on Spain’s 23-man squad: 180.91 cm; average German height: 184.48 cm), and Puyol‘s header was perhaps most impressive because of his unimpressive height.

Still, there would seem to be clear advantages to height (and we know that bigger players are more desirable among youth-league coaches).

The question is open to further analysis. But here’s a simpler conclusion that seems solid: the appearance of height apparently matters quite a bit.

A reader in Norway named Christian SÃ¸rensen examined the height statistics for all players in the 2010 World Cup and found an interesting anomaly: there seemed to be unnaturally few players listed at 169, 179, and 189 centimeters and an apparent surplus of players who were 170, 180, and 190 centimeters tall (roughly 5-foot-7 inches, 5-foot-11 inches, and 6-foot-3 inches, respectively). Here are the data: 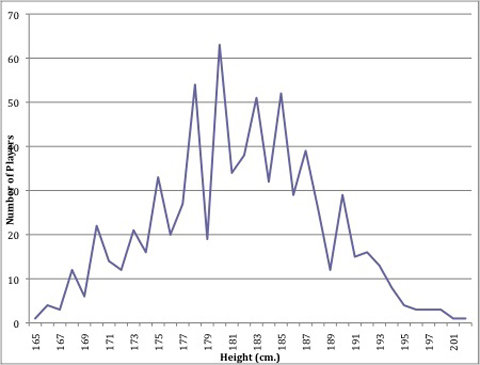 It’s hard to imagine that players and teams wouldn’t exaggerate their height (it sure happens in basketball), whether for the purpose of intimidation or merely self-esteem. Christian’s discovery may not be earth-shattering, or even remotely important, but it does remind me of the nifty analysis by Joseph Grundfest and Nadya Malenko that identified companies who massage their earnings via their aversion to the number 4.

How reminiscent this graph is of Bart Simpson's head.

Looks like a regular bell-curve describing the height of any random FIFA-sized population sample of males.

I agree with Raymond (#3) on this. It's probably just rounding off when reporting. Much like a price ending in in 99 cents 'looks' a lot smaller then one that's an even dollar amount, maybe the opposite is true and having an even height sounds larger.

And while this isn't a satistical analysis (and could be confirmation bias), the number of 170, 180, and 190 cm players looks a little higher then would be expected to make a smooth bell curve. If players/teams were mis-reporting their height, that would account for a larger number in that range.

The critical boundary, with the biggest jump, seems to be between 179 & 180cm, and that happens to be about average height. In effect, it's a watershed: 179cm and you're (self-)perceived as below average height, 180cm and you're above it.

It's looks to me to be also a useful indicator of the vanity and/or body image pressure sports people are under. I notice that every August now (at the start of the European football (soccer) season) there are articles where coaches talk up the impressive BMIs of their key players following pre-season.

You ask a question, "How much does height matter," and then answer a different question, "Is heigh exaggerated?"

The answer to the former is that height is not necessarily desirable in soccer because of all the sports little mechanical advantage accrues to taller players.

Basketball - the basket is 10 feet and you can shoot from next to it. If you could shoot only from 10 feet away, height would be mitigated.

Football - size matters in pushing people and hitting them but many skill players on both sides are smaller because speed matters on the edges.

Hockey - size has become more important as padding has increased because the game has become more constantly violent instead of rough. And N.American ice sheets are smaller than European ones so there is little edge room.

Baseball - size allows a pitcher to move his arm slower to deliver the ball as fast as a smaller pitcher. Size allows a batter to have more bat extension so the bat head is moving faster.

Crew - the water holds up your weight and being taller means more sweep coverage per stroke.

Swimming - the water holds you up and your arms and legs pull more water.

Soccer - except for headers, size is not very important. Headers are most important on corners and free kicks and teams move up their backs for their size, but the striking area in front of the huge net is so large that a smaller player who can create some space with quickness can be effective. Soccer selects for large and small players because both are useful up front. Smaller players are often more useful in midfield where there's more room and creating space is the aim of ball control. Larger players are selected in back because they can fight for high balls and struggle with the larger strikers.

I think it's probably just a case of some sources rounding up.

Raymond has it i think.
Compare weights of basketball players. You'll find a lot (I think) are rounded to the nearest 5 lbs. Not that crazy to think about.

I think Raymond is on to something here, but it maybe more because of culture.

In regards to your earlier post about coaches having bias towards older players, the same thing happens within an athelete's mind. They are better than their "peers" so they enjoy the game and keep practicing. By the time they are 15,16 and the advantage evens out they have already logged thousands of more hours of practice.

Taller people are less efficient, using relatively smaller muscles to move greater body weight. They are more likely to suffer sprains, breaks and pains more than smaller people in activities where you need to mostly move your own body.

The chief among those sports is gymnastics, though sex would count too.

After spending the last month watching world cup soccer/football, I am desperate to know the following: is there any correlation between how much W.C. teams sing their national anthem and how much they win? I.e. if one country's team has all their players belting out their national anthem, while the opposing team stands silently during their anthem, who is statistically more likely to win the game? I'm dying to know....

You are right. There is physics to sports that can't be ignored. Soccer players have to accelerate faster, which is more important than reach, and favors certain compact body-types.

As size increases, the strength (and surface area)squares while the volume cubes (and I vaguely recall that the torsional strength is the fourth power...). A child 1/2 your size has 1/8 (the cube root) your volume but only 1/4 (the square root)of your surface area. So bundle up your babies when it's cold..

Reminds me of a graph in the Newark paper 15 years or so ago, showing the distribution of speeds cited in traffic tickets. It was a fairly smooth distribution with a huge peak at +19 (19 mph over the limit). The thinking man's explanation was that the police were giving some faster drivers a break, since insurance penalties kicked in at +20. The state police official explanation was "coincidence".

Looking at the graph: peaks at evens and 5s. Seems largely sensible rounding (go measure yourself at start and end of the day).

You also might consider that a person's height varies during the day, and over time. In addition, there are variations in posture, clothing, etc. The upshot is that it's probably not even possible to determine anyone's height to an accuracy of 1 cm.

Arthur Brooks is an economist who for 10 years ran the American Enterprise Institute, one of the most influential conservative think tanks in the world....