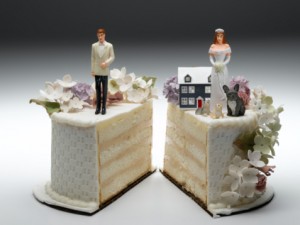 To avoide the dynasties that have misruled many Latin American countries, Guatemala’s constitution forbids relatives of the incumbent president and vice-president from running for high office. This clause had seemed to scotch the chances of Sandra Torres, the country’s ambitious first lady, becoming its first presidenta. But on March 21st she and her husband, Álvaro Colom, announced a novel way to sidestep the rules: they filed for divorce.

Rather than being a sign of marital discord, the parting looks much more likely to have sprung from political unity. Speaking last month, Mr Colom gushed over his wife’s leadership skills and the “impressive passion” she inspired. On March 8th Ms Torres declared that she would run as the candidate of National Unity of Hope (UNE), her husband’s party.

It’s still hard to imagine a divorcee getting serious traction in a run for U.S. president, even if the divorce were real.

Reagan was divorced...If your point is a woman divorcee is less likely to win than a generic woman, that is unfalsifiable...

> It’s still hard to imagine a divorcee getting serious traction in a run for U.S. president, even if the divorce were real

I find it hard to believe that many of the above got/are getting serious traction, but not due to a divorce.

Or did you mean "a divorcee of a former US president"?

Ronald Reagan was divorced. Though I'm waiting for another bachelor president like James Buchanan. The closest we've come in terms of primaries is one of the runs by (then bachelor) Fred Thompson. I feel that we single dudes are a seriously underrepresented constituency in American politics.

And John Kerry was divorced (and remarried), and came pretty close to winning

It seems some people did not understand the article. What the "first lady" is doing is divorcing the president as a loophole to the constitutional prohibition she has for running for president. Corruption at its finest since it is only a "paper" divorce.

We understood the story just fine, but Mr. Dubner's point at the end seems to be a broader one about American politics...unless it's actually directed at Hillary Cinton, I suppose.

Thanks for discussing American history, it is most definetily all about USA

I guess since Guatemala doesn't have oil it's not worth the trouble...

A divorcee is a woman, unless you happen to be a lawyer. I take the point to be someone who is (a) a woman, and (b) currently divorced and not remarried.

As an aside, in Pennsylvania the state government uses the spelling employe instead of employee. The urban myth is that this was done to save on printing costs for tax forms and instructions.

As a Guatemalan I can only hope that all of this "low class, soap opera" acting is done in vain, it is up to us the people to stop her for getting elected, it is amazing how they are laughing in our face by playing around our constitution.

Interesting article. I suppose they used a divorce mediator instead of litigating!

The U.S. is an outlier when it comes to policing, as evidenced by more than 1,000 fatal shootings by police each year. But we’re an outlier in other...

How Can You Escape Binary Thinking? (NSQ Ep. 67)

Also: why is it so satisfying to find a bargain?

Leidy Klotz on Why the Best Solutions Involve Less — Not More (People I (Mostly) Admire Ep. 45)

When we try to improve things, our first thought is often: What can we add to make this better? But Leidy, a professor of engineering, says we tend to...

What Happens to Patients When Thousands of Cardiologists Leave Town? (Freakonomics, M.D. Ep. 7)

This week, Bapu Jena presents some hot-off-the-presses research exploring the relationship between how many patients a doctor sees, and how well those...