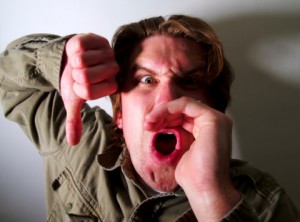 Our latest Freakonomics Radio podcast, “Boo…Who?“, tackles the act of booing. Why do we do it? When and where (if ever) is it appropriate? While we focus mostly on modern examples, audiences have been voicing their discontent for millennia.

Tracing the boo back to its origins takes you to ancient Greece, and the Festival of Dionysia, when playwrights competed to determine whose tragedy was the best. Audience participation was considered a civic duty. At the Colosseum in Rome, booing, or the lack thereof, often determined whether a gladiator lived or died.

Hard to say exactly what a boo sounded like back then. Maybe more of a shout, a jeer, or a whistle, rather than the extended, cow-like booooooo we issue today. According to linguist Ben Zimmer, the first time the word “boo” appeared as an expression of dissatisfaction was in the diary of a British schoolboy in 1833. Below, we’ve compiled a list of some noteworthy boos throughout history. It is not remotely encyclopedic, and leans very heavily on very recent events. So feel free to supplement with more examples in the comments section.

Abe Ribicoff speaking at the Democratic National Convention in Chicago 1968.

I hadn't heard about this. According to wikipedia, "Many conventioneers, having been appalled by the response of the Chicago police to the simultaneously occurring anti-war demonstrations, promptly broke into ecstatic applause [when Rubicoff criticized the police response]. As television cameras focused on an indignant Chicago Mayor Richard J. Daley, lip-readers throughout America claimed to have observed him shouting, "F**k you, you Jew son of a b***h."" Craaaazy.

The Best Boo I ever heard (and admittedly took part in) was after watching a Shakespeare play. It was "The Moor of Venice", held in Stratford, Ontario, in front of hundreds of school kids. The play was magnificent, and all the actors and actresses were cheered by all the kids - except the actor who played Iago. He was booed, and clapped, and then cheered for.

"The Moor of Venice"? Surely you're thinking of "Othello"? "The Merchant of Venice" is quite a different play.

As you bring up Shakespeare, it seems from internal evidence that in his time the equivalent of booing was to hiss. For instance

"MISTRESS FORD: Do so. Go tell thy master I am alone.
Exit ROBIN
Mistress Page, remember you your cue.
MISTRESS PAGE: I warrant thee; if I do not act it, hiss me." - "The Merry Wives of Windsor"

"And, as I am an honest Puck,
If we have unearned luck
Now to 'scape the serpent's tongue..." - "A Midsummer Night's Dream"

I wonder what caused the shift?

(1976-1981) Jim Hensons Muppets Statler & Waldorf get in one or two boos and heckles in each episode of The Muppet Show. Most characters got heckled, mostly prominently was Fozzie Bear.

didn't Roseanne Barr get booed when she 'performed' the national anthem?

Let me be the first to ask...What does this have to do with economics, incentives, etc.?

Answer: What with all the volatility in markets around the world these days, economists today are keenly studying what used to be called the "Boo and Bust" cycle.

Back when obama was president-elect, some pianist at Carnegie Hall said something completely inappropriate (and obviously unrelated to piano-playing) about being glad W would be out of the whitehouse, and he got quite a boo from the audience. And that's in liberal NY. Just play your piano, man; have some class.

My deduction is that the GOP/basically controlled by religious right is clearly lacking in moral courage and stature. They are not patriots if they boo a soldier, nor are they smart in their clearly lacking disrespect of a soldier.

I also deduce that it is a dangerous time in our nation's history when pubs who want to be prez are so willing to be beholden to religious extremist, and yet are critisized by economists for being so ignorant in the debates about economics and taken to task by a sitting GOP senator in a national conservative publication for having so little to say (and one can only conclude knowledge) about foreign policy.

We live in interesting, but perhaps very dangerous times.

Perhaps, most curious of all is that GOP seems to think they have a lock on a big win in 2012 despite the facts that Obama and the Democrat party are way ahead in fund raising and Obama's poll numbers improve with every pub debate.

But, likely they don't know those things because it seems to be almost theologically sacred for pubs not to read newspapers or be up on the news, and that certainly includes what prominent blogger "Red State" called, referring to the GOP slate running for the nomination, a "pathetic lot." Google it, you'll find it to have been said and if you're paying attentin at all, you'll find it to be oh so true.

In my experience, most young people join the military when they have few other viable options, and/or they see it as an economic opportunity, especially the educational grants.

This doesn't mean they aren't heroic and don't have noble motives, heroism and nobility have nothing to do with economic circumstance: i.e. your suggestion that an equal proportion of "rich kids" isn't noble has no basis. Noble motives *and* nothing else going on are the ingredients for joining the military.

Yes, you can suggest some counterexamples; I'm talking about the bulk, not the fringe. And with the counterexamples, I'll bet if we look under the surface and we'll find other discontents with what they were doing before, or a special psychological need for heroic recognition. I'm not criticizing, just pointing out what I think is the reality, and I think there is understanding to be found in the vast number of people who don't put their lives on hold to join the military, beyond suggesting that they are all unheroic, unpatriotic, and/or politically leftwing and adverse the the military.

something just occurred to me. as we age, change is more difficult. And so the person who comes up with a new way of seeing things will be `boo'd.' I guess that I will have to get used to it. AFter reading this post, I ate a "junk-food candy bar" out of frustration-- my first in many, many months. The frustration is of wanting to finish and just almost, but not there yet (at the point of flight `down' the winding staircase of my dream). I really have been here before (1991, 1995) and understand that you may wanna help? Thanks, but I really don't see how you can. My only questions left concern publishing.

[WORDPRESS HASHCASH] The poster sent us '0 which is not a hashcash value.

You didn't touch on this at all, and I hate to say it because we don't think in this way in the US but there are differences in acceptable behavior among social classes. The crowd that boos at the baseball game is not the same crowd attending the opera. With that said, I don't think the opera crowd is "better" than the other, but there are differences in behavioral norms among different social groups. I didn't notice social classes until I was stationed oversees in countries where it is obvious, but yes it's there.

Yes, I think you are on to something that was not touched on. I would point out a different aspect of class as it affects audiences: I live in the city, and I'm reasonably urbane/cool; when I attend most theater performances I feel like I am sitting amidst a horde of tourists and suburbanites who have come into the city for their big night out, and they behave in a way that is also meant to show off their taste and sophistication. They titter at any risque--esp. gay themed--humor as a way of showing how open minded and sophisticated they are. The rest of us in the audience aren't there to spoil anybody's night out, so we smile politely and applaud the cast because in general they are hard working professionals regardless of how well the show comes together.

I don't have as strong a sense of opera audiences, but I'll bet they are more knowledgeable about opera, as a more sophisticated artform.

Don't forget the reception given to the premier of Le sacre du printemps (The Rite of Spring) Ballet at the Théâtre des Champs-Élysées in Paris on May 29, 1913. Was it the music of Igor Stravinsky, or was it more likely the appearance on stage of the Ballets Russes dressed in caveman costumes doing a primitive fertility stomp as choreographed by Vaslav Nijinsky that offended the highbrow audience? In any case, much booing and brawling ensued leading to an infamous riot, wonderfully recreated in the 2009 French film, 'Coco Chanel & Igor Stravinsky'. Recommended viewing ****

I'm always fascinated to hear about riots at performances of classical music or plays that, today, are considered inoffensive.

In 1907 John Millington Synge's play "The Playboy of the Western World" sparked riots when it was first performed. Nationalists were enraged at its depiction of violent and ignorant rural Irish people, who in the nationalist narrative of the day were meant to be the sound, stable, religious backbone of the country. I grew up in the rural Ireland it described, a century later, and learned that play in school. The teacher was fighting against yawns in that class, not boos and riot :)

Bass guitarist Stuart Hamm is always booed! The wikipedia article says that when he was introduced on stage as "Stuuuu" the crowd started shouting "Stuuu" and it stuck. Nonetheless it sounds very much like booing, hence the amusing situation around 3 minutes 40 seconds into this video, showing the appreciative crowd cheering AND booing Hamm's amazing bass solo!
http://www.youtube.com/watch?v=H8Q_J2fIKPI