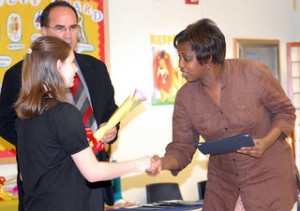 “For more than 10 years national and local policy has focused attention on raising aspirations. But there is no evidence that if you want to impact on the attainment of lower-income pupils that changing attitudes and aspirations is the way to go. There is an urgent need to change direction,” says Todd.  “It’s not that aspirations aren’t important. It’s not about turning them on but keeping them on track. It’s highly unlikely that any child starts school wanting to be unemployed.”

The researchers found that “the most effective way of helping children from low-income households to achieve their ambitions is engaging parents in their children’s learning and in their own learning and in providing a range of support for children such as mentoring.”

I believe that this research confirms what I've always suspected. The most important part of a student's success is the parent. Most parents hand their children off like a baton in a relay race. If the parents stay involved in the child's learning they both gain. Isn't that what economics predicts.

I agree. As a public school teacher, I know firsthand that parents and schools need to work as a team. It's incredibly hard to break bad habits in kids, but impossible if the home is working against you.

A big reason why lower SES children have lower educational attainment is because intelligence is, in large part, hereditary. Their lower income parents are likely to have lower intelligence.

Did you want a happier answer?

Raw intelligence isn't what keeps kids from finishing high school. Grades in the US have at least as much to do with perseverance and paperwork handling as with intelligence.

Let's face the real truth: for the last several decades, all you needed to do to get a high school diploma in most states was to show up for school. People with an IQ of just 80 (below normal) can figure out how to show up for school. It's slightly more complicated than that in places that require you to pass a high school exit exam, but the connection between poverty and dropping out has been true ever since America introduced the concept of a comprehensive high school.

The research demonstrates that psychosocial factors are at least as important as IQ now. Study after study shows that the typical dropout has a normal IQ, and that about 4% of them have a high IQ (above 120). Our current dropouts do have many factors in common, though: abusive and neglectful parents, severe mental illness, drug addiction (theirs, their parents', or both), pregnancy (still a leading factor for girls), poverty, moving house frequently, living with a parent who has a string of romantic partners in and out of the home, etc.

The Gap must close!

Sadly, biological differences inhibit the closing of The Gap.