We recently put out a podcast called “Legacy of a Jerk,” which deals in large part with the ancient injunction against speaking ill of the dead. For the most part, this injunction is still widely obeyed. So I was quite surprised to see what Mark Bittman recently wrote on his N.Y. Times blog:

Sysco is the latest food giant—it’s the largest food distributor in the country—to come out against gestation crate confinement of pigs. The National Pork Producers Council’s communications director was quoted in the National Journal saying: “So our animals can’t turn around for the 2.5 years that they are in the stalls producing piglets…I don’t know who asked the sow if she wanted to turn around.” Really.

Speaking of pigs, the VP of PR for Chick-fil-A dropped dead of a heart attack the week after the chain’s latest homophobia/anti-gay marriage scandal. Here’s an obit, and here’s more about him. Meanwhile, Chick-fil-A had record-breaking profits after its President, Dan Cathy, drew a line in the sand over same-sex marriage.

I read that “speaking of pigs” line three or four times to make sure I understood. At first I thought that Bittman was speaking metaphorically — that no one had in fact died. (But he did: the man’s name was Don Perry.) Then I thought maybe the Times page had been hacked, but that doesn’t seem to be the case either. FWIW, here’s a screenshot: 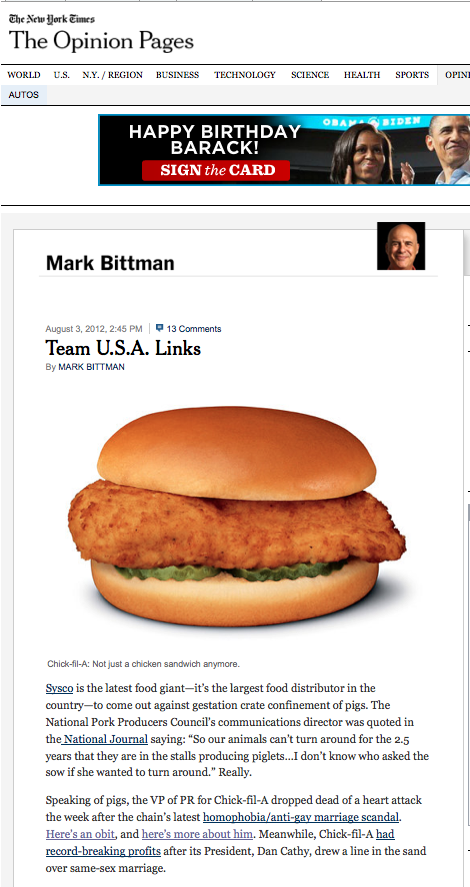 Then I thought that, given our current state of political and social discourse, maybe I am naive for being surprised that even someone as reputable as Bittman would write something like this?

I wrote to Bittman to ask him about the item but I got one of those automated “Unfortunately-due-to-the-number-of-emails-I-receive-I can’t-respond-personally-to-everyone-who-writes-to-me” replies.

Addendum: Bittman walks it back.

There are principles, and then there's team loyalty. In this case, Bittman's loyalty to the gay rights team trumped the principle of not speaking ill of the (recently) dead.

This phenomenon is known as "cheat to win."

Bittman is reputable? Surely you jest.

I remember when Pierre Trudeau died here in Canada. Dozens of people called in to radio stations just to jay, "I'm glad that SOB is dead" or such comments. It was a day of shame in my opinion.

On a side note -
“I wrote to Bittman to ask him about the item but I got one of those automated “Unfortunately-due-to-the-number-of-emails-I=receive-I can’t-respond-personally-to-everyone-who-writes-to-me” replies.

Better than no reply at all?

Thumbs up if you have ever had a non-response when writing to: dubnerlevitt@freakonomics.com

Be glad you're not part of the NY Times site any longer...

He's just spreading tolerance, and speaking our against hatred.

If spreading tolerance is now defined as celebrating the death of an employee of a company whose CEO's values you disagree with, then the definition has changed since my mother taught me.

How is Bittman "reputable" beyond speaking about food and cooking? Has he, in the past, given you confidence about his insight and sensitivity about politics, economics and law? Or are you just seeing his expertise in one field, and assuming that it carries over to some other unrelated field?

Personally I think that's a little hypocritical to speak bad about someone, and when this someone dies, suddenly (s)he's a good person and nothing wrong can be said.

Your post is a non sequitur. No one "spoke bad" about the VP of PR before he died, but many took their shots after he did. That's just plain cowardly.

Being an opinion article, I'd give him a bit more moral wiggle room. He probably knew nothing of Don Perry and assumed him to be some serial gay murder.

I'm convinced that "Mark Bittman" is the sock puppet Frank Bruni uses when he decides to get a little more bitchy than normal.

Oh heavens, get the smelling salts.

How dare anyone impugn someone just because they have devoted their professional life to defending bigotry and hatred?

Yea, Hitler, he was such a mensch.

What makes the comment even worse is that it immediately follows a statement about the very real suffering of actual pigs. So Bittman comes across like a flaming jerk on TWO fronts.

Who was that who had the opposite opinion, that you should not speak ill of the living? After all, that could easily come back to you. But speaking ill of the dead is surely a victimless crime!

Just so I won't be accused of speaking ill of the dead, the walking and breathing Dan Cathy is a thoroughly despicably evil human being, and when he dies I will spit on his grave. I haven't seen any direct quotes from Don Perry to justify a similar conclusion, but it does seem from what I've read that they were generally of a similar mindset.

This mess isn't just about beliefs or free speech. Their company gave money to hate groups lobbying congress not to oppose the death penalty for gays in Uganda. They gave money to groups who take gays kids from families and try to "cure" them. I'm all for having opinions, but working to destroy the lives of innocent people is beyond the pale. These people are personally morally responsible for their actions, and "God said it" no more excuses their actions than it would any other delusional criminal who told the cops that God told him to assault or kill someone.

Can you articulate what is wrong with speaking ill of the dead, besides there being an "ancient injunction" against it? Because if you can't this whole post seems pointless.