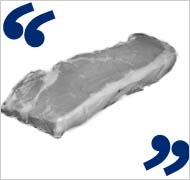 Each week, I’ve been inviting readers to submit quotations whose origins they want me to try to trace, using my book, The Yale Book of Quotations, and my more recent researches. Here is the latest round.

What about “Sell the Sizzle, not the Steak?” I have heard it many times but never have found where it came from.

The Yale Book of Quotations has this under the name of marketing expert Elmer Wheeler:

“Happiness is positive cashflow.” Any ideas?

Charles Dickens said this, although not in quite those words. The YBQ has this:

“It’s not what you’re country can do for you; it’s what you can do for your country.” – JFK said this, but I read somewhere that a statement to this effect traces all the way back to Pericles. Any thoughts?

There are a number of precursors of Kennedy’s line. The earliest given by The Yale Book of Quotations is by Oliver Wendell Holmes, Jr.:

“We pause to become conscious of our national life and to rejoice in it, to recall what our country has done for each of us, and to ask ourselves what we can do for our country in return.”
Memorial Day Address, Keene, N.H., May 30, 1884

Fred I was wondering who said “I rather die on my feet, than live on my knees”

An article in _The Survey_, May 1, 1924, says: “The day he [Emiliano Zapata] was murdered, and the news of it reached Cuernavaca, a barefooted peon scratched with his penknife in crude letters on one of the posts of the Boarda Garden, the old Maximilian palace, the following: ‘Rebels of the South, it is more honorable to die on your feet than to live on your knees.'” The saying is commonly credited to Zapata himself (who died in 1919), but the recounting of the incident of the penknife-wielding peon does not make that attribution.

Do any readers have any other quotations whose origins they would like me to attempt to trace?

What is the origin of the phrase: "Fully saucered and blown." - to mean something completely or fully considered.

Thanks for answering! Now I have another sales book to read...

I've got a dictionary and am willing to look up definitions of words for people. Can I have a column too?

What about "full head of steam"? I wondered about this when viewing an old machine drawing that depicted a human head blowing steam as part of the steam engine diagram....

I know this probably does not date as far back as some phrases, but I have seen the above quote attributed to both Nelson Mandela and Marianne Williamson. I am curious of its origins. Thank you!

On No. 4: "Full head of steam" means steam at full operating pressure, as in a steam engine's boiler. "Head" is a rough synonym for "pressure" in engineering parlance.

You can also get weekly emails of common phrases from "A Phrase A Week" here:

"I've got a dictionary and am willing to look up definitions of words for people. Can I have a column too?" Mike M #3

Mike, you perhaps don't understand that Fred Shapiro is actually the editor of the Yale Book Of Quotations. When he consults the book to answer people's questions, he is consulting his own work.

You offer to look up words in a dictionary. Unless you compiled said dictionary yourself, you would just be copying someone else's work. So, no, you can't have your own column.

How about this piece of advice, often referred to as the first rule of showbusiness: "Always leave them wanting more." The popular opinion seems to be Walt Disney, but I haven't found anything to substantiate this.

Maybe you can help Paul Krugman out:

"I can't find the reference, but I believe it was an English matron who declared that airplanes were an invention of the devil, that people should take trains as God intended."

keith, I don't know if it's the original use, but that line was used by Michael Flanders in the show "At The Drop Of Another Hat". It comes at the end of the "By Air" monologue, and leads into the "Slow Train" song.

Oh, I found the quote. The monologue ends like this:

And it's chocks away and they start up the engines, you know - fshhh - and the whole plane starts to shake, like this. It's like a cat with a pigeon, you know. But I'm never worried, because I know that every tiny part of this great machine is a miracle of modern engineering. Then the ashtray falls off - oh!

No, I think I agree with the old lady who said, "if God had intended us to fly, He would never have given us the railways!" So we've written a song about the railways instead.

I remember a quote (but have been unable to discover the source) that goes something like this: "Any over-large group of like-thinking individuals reeks of oppression." Any ideas?

How about "Almost only counts in horseshoes and hand grenades"?

Sometimes othe items are listed beyond that, but whats the original quote and origin?

My professor at University of Leiden asked today if any of the students knew the origin of:

and by sport referring to politics.

The professor haven't found it either so..

I hope you could help me with this one