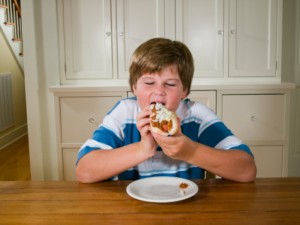 According to new research by Mir M. Ali, an economist at the FDA’s Office of Regulations, Policy and Social Science, it’s because they’ve grown up around overweight parents and peers and therefore think their overweight status is, well, normal. The paper, coauthored with Aliaksandr Amialchuk and Francesco Renna, is called “Social Network and Weight Misperception Among Adolescents,” and is forthcoming in the Southern Economics Journal. From the abstract:

It is recognized that public health interventions targeted towards changing lifestyle behaviors to reduce overweight is a considerable challenge. It is important that individuals recognize their overweight status to be a health risk in order for an effective change in lifestyle behaviors to occur and growing evidence suggest that actual weight and perception of weight status often do not match especially among adolescents. In this paper, we explore the extent to which adolescents that are exposed to overweight parent and peers are likely to misperceive their weight status. Using data from a nationally representative sample of adolescents we estimate instrumental variable models with school level fixed effects to account for bi-directionality of peer influence and environmental confounders. Our results indicate that individuals who live in an environment that exposes them to overweight/obese parent and heavier peers are more likely to misperceive their weight status and think of themselves to be of lower weight than they actually are. Our analysis also revealed differential effect by gender and type of peers.

We should locate volunteers from among their classmates to inform them of their weight status with any means necessary. They need to be aware that they are overweight even it includes aggressive techniques. One might suggest:
1. Repeated reminders set to rhyme
2. Substitution of their given name for one with that reinforces their weight problem.
3. Physical reminders such as bumping, pushing, or pulling out a chair from behind them when they are about to sit.
4. Drawing their attention to poor finishes in physical activities.
5. Reminder of their inability to obtain to a significant other compared to more slender individuals.
6. Hearty laugher at their missteps.

I hope this modest proposal is strongly considered by school administrators.

These children should be classified as special needs kids. They should be encouraged to embrace this challenge and rewarded for their gluttony. The bar must be set high and no child should be left behind. A trained feeding counselor and an aid must be on hand at all times to administer high glycemic foods and praise to this under served population. A new standard must be established. The criteria for graduation should include type two diabetes, advanced atherosclerosis and clinical depression. I urge you to contact your legislator and congressperson to make this issue a top priority. What is more important, meeting the needs of our children or wasting valuable tax dollars on Obamacare?

for an interesting take on how much things have changed in 35 years, take a look at "The Bad News Bears" from 1976. Engelberg is the rare "fat kid" in 1976, but kids that size are very common today.

should tv and movies depict obese kids as "normal"?

That's a good point, David. I was in elementary school in the late 70's and can remember the fat kid (singular) in our class plain as day.

Absolutely. After a year in Japan I was shocked when I arrived at Heathrow Airport to see the proportion of deeply overweight people. What had seemed normal for years only became unusual in the relatively thin population of Japan.

I like the idea of individuals taking personal responsibility for their behaviour. However I also recognise that environments make some kinds of behaviour easier. It was very easy to eat healthily in Japan, with cheap, delicious and healthy food readily available, plus there was a stronger personal pressure to stay in shape since most people were realtively lean.

Perhaps there is some truth to the phrase obesity "epidemic".

So we need someone with better programming chops than I have to put together a body recognition piece of software for social networking sites. It would do 3 things:
1. Identify individuals in images.
2. Calculate waist-to-hip ratio based upon the image (the 2d to 3d conversion might be troublesome, but it's a better indicator of health risk than BMI and can be assessed by dimensions).
3. Overlay ratio or an icon indicating health risk on obese individuals' pictures.
This might offend some, but self-esteem shouldn't be improved by cultivating denial.

As the mother of 3, I cant agree with this more. I have lots 96 lbs in the past year. In the beginning, I would cook for myself a healthy dinner and cook for my kids what they like to eat. Over time, they started dipping into my low calorie foods and liked them. Now I only cook the healthy stuff because thats what they ask for. Lead by example. Kids are going to eat what they are used to eating, even now when we go out, they dont want breaded chicken...they want it grilled and they order veggies instead of fries. Time to change the way we eat and the way we feed our kids.

An important point is buried in the middle of the paper. Older adolescents actually over-estimated their weight. It seems difficult to conclude that there is actually any harmful effect if the children "grow out" of the misperception within a few years.

Also the authors don't seem to have considered an equally important investigation of the data. The contribution of parents and peers to (under-)eating disorders, mainly in girls. At a minimum the misperception of overweight by underweight individuals has to be causing some confounding of the results.

Research is good, but I thought that was a prima facie case. Americans are dumbed down and fattened up.

In order to factor out genetics, would it not be better to do a study on the relationship between obese parents and their adopted children?

Nice point! I don't think AddHealth has enough adopted children to explore this, but a bigger dataset like NHANES might. Another problem might be selection of adopted kids.

http://bit.ly/fA8OQJ Processed foods linked with lower IQ in children
People who question what foods they eat raise more intellectually capable kids? That's the difference between correlation and causation. The link between processed foods and lower IQ's may not be causal, since the study didn't find any causal mechanism, but a parents awareness of what foods their child eats may relate to how the child is raised in general.
Also, GM foods have also been known to break down the immune system of test subjects, from people to animals. Lower IQS and sicker kids! I don't think that it is orchestrated by one conglomerate trying to keep people down, but I definitely think that our education and corporate food infrastructure operate in a way to make that seem like the case. Public schools save money by making ketchup a vegetable: http://abcn.ws/dLOHkd

Idiocy that won't fly in richer school districts, but the poor, (to which IQ test don't really target) don't have the free time to really fight this well. "Some theorists suggest that socioeconomic disadvantages are the main causes of... differences in IQ." From here: http://bit.ly/aFAK9 Actually, in academic circles, most theorists think this.

And then we get junk science to make us feel better about this cycle of "food oppression." I read an article that said that black people are better at handling a bad diet than white people, regardless of the hypertension and diabetes rate in that population. I bring up race, because in America, it is nearly synonymous with class. White folk in the same economic conditions have approximately the same levels of diabetes and stroke.

So the poor are kept unhealthy, told to accept ketchup as equivalent to spinach, and then we are surprised to find this: http://huff.to/g7IpAl Further, our healthy food isn't as healthy as it used to be: http://bit.ly/hdG5wF and it costs more than even more unhealthy food: http://bit.ly/dPV41a

So rather than focusing on these kids who are buoyed by self confidence and ignorance combined, why the heck don't we try to fix our food infrastructure, move away from crops whose nutritional value has dropped, and put producers of food closer to where people live and work?