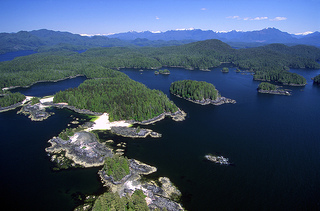 A reader named R.E. Riker alerts us to the progress of an experimental ocean restoration project (more here); the ringleader is one Russ George, who has proven controversial. Before your knee jerks in one direction or another, take a look:

This summer the crew has been aboard ship engaging in what is surely the most substantial ocean restoration project in history. In a large ocean eddy west of Haida Gwaii the project has replenished vital ocean mineral micronutrients, with the expectation and hope it would restore ten thousand square kilometers of ocean pasture to health. Indeed this has occurred and the waters of the Haida eddy have turned from clear blue and sparse of life into a verdant emerald sea lush with the growth of a hundred million tonnes of plankton and the entire food chain it supports. The growth of those tonnes of plankton derives from vast amounts of CO2 now diverted from becoming deadly ocean acid and instead made that same CO2 become ocean life itself. For weeks the men and women, on this village team toiled in stormy overcast weather and fog without a hint of blue sky. In mid-August the skies cleared and revealed the wonder of the mission on which they have laboured. Satellites focused on ocean health that monitor and measure plankton blooms sent back stunning images. Far offshore in these Haida salmon pastures a vast plankton bloom is revealed matching the health and vibrancy of blooms seen in rich coastal waters. The return of such blooms is “the stuff dreams are made of” for all ocean life.

Thanks for the post about me.. Would you please refer people to my blog for the truth about me instead of Wikipedia that is being persistently manipulated by people with ill intent to smear me. I am found at www.russgeorge.net

You've missed the major point of our work... IT JUST WORKS!

Work over six years which reached a high point last summer withe taking of nearly 200 million measurements of our ocean plankton pasture made this the most extensive and intensive study of plankton blooms and ecology ever undertaken. Here's a link that tells the story...http://russgeorge.net/2013/04/28/greenfinger-speaks/

What if the largest part of the global crisis with CO2 is solved by helping Mother Nature recover from the great harm we have inflicted? What if the cost of managing billions of tonnes of CO2 and converting it from certain ocean death into ocean life is mere millions not hundreds of billions of dollars?

Given that this (crazy) geoengineering technique is estimated to cost $400 per tonne of carbon (http://sydney.edu.au/news/84.html?newsstoryid=10740), we'd be better off just spending all of the money on renewables.

This brings up so many interesting questions. On the one hand, international conventions are in place with good cause, on the other, we could sit dithering about what to do while the oceans die before our eyes.

We'll have to wait and see if this process is a viable answer to CO2 problems, not to mention feeding the fishies. But there are always many people who lash out at anyone who steps forward to actually try something. They usually get paid by non-profits designed to find solutions for the very problems that are being addressed.

Either could be right or wrong, both have valid arguments.